And we’re off to Saturday morning and the Tink 10K!

The alarm went off SUPER early (4 AM) and I was *so* glad that I was doing the race with my friend because it turned out the outlet I plugged my phone into was connected to the light switch. I turned out the light and turned off the outlet – waking up to my friend’s alarm and a dead phone. NOOOOO.

Now, I don’t normally mind running 10K or less without music, especially in a race and even more especially at Disney. But, I lately I’ve come to really LOVE running solidly set intervals as I’ve found they work best for me. BUT, not only that, I had specifically planned to trial run 60:30 intervals during the 10K to get an idea of whether I could manage 60:30 with the official Galloway pacers to hit a 2:30 finish time on Sunday.

I plugged my phone in immediately and crossed my fingers I could get enough juice to last me the race. I got ready – going with the official race shirt. It’s become a bit of a tradition for us, so I decided to stick with it. Yes, I know that some runners consider it “bad luck” or “bad form” and so on, but it’s a participant shirt, not a finisher’s shirt. (Sidenote: I won’t even BUY the “I did it!” shirts because “I haven’t done it yet.” Who else thinks the Expo should be open on Sunday afternoon????)

My phone charged up to about 40% and I popped it on airplane mode to conserve what I gained for as long as possible. We headed out the door around 4:40 AM for our 5:30 AM race start. We weren’t sure what security would look like on race morning, so we headed off toward the Disneyland Dr. crosswalk and headed up that way instead of cutting through the parking lot like the day before. We ended up going through security right near ESPN Zone and it was super easy. Neither of us needed to check a bag, so we hopped into the crowd that was prepping to go to the corrals.

The set up this year for this race was pretty terrible. I heard some people had to go through security multiple times (particularly if they had to check a bag) and they funneled us through the most narrow walkway to check bibs. Maybe it was the light rain for the 10K last year, but I didn’t remember it being like this in ANY past race. We got through well enough the morning of the 10K, but there was an aura of foreboding.

We parted ways to run our own races and I hung back in D until my race began.

Before I knew it, I was in the parks (LOVED the course through the parks this race – it felt like a lot more park time with in and out and more weaving). I started to hit some fatigue at this point and my pace definitely slowed. Somewhere around the 4th mile or so, a girl ran up beside me. In my running haze, it took me a moment to realize I knew this girl! Big hugs and a removal of an earbud took me into the next part of the race with a running buddy! 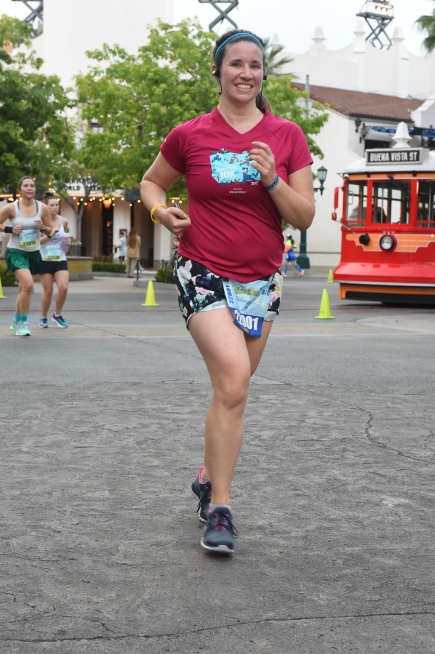 This wasn’t just any running buddy though – this was a dear friend from college that I hadn’t seen in YEARS! I was so thrilled she caught me on the course. We caught up on jobs and homes and families and life while cruising along to my intervals. She let me pull ahead maybe about halfway through the 5th mile and I sailed on to the finish solo with a big smile. It was just SO SO good to see her and catch up! These miles were slower, but not super slow considering that I was chatting and not pushing hard.

Before I knew it, I was crossing the finish line! I thought for sure I’d PRed and I couldn’t wait to check the results. I was FLOORED to see that my time was IDENTICAL to last year’s 10K PR. Identical. To the second. Even my 5K split was identical to last year. I swear I checked the official results at least five times because I thought I’d read the same results twice. But nope, they were just the same. But, I felt stronger and got to chat with a friend, so I definitely had improved over last year physically.

I ran into a couple running friends from the Disneyland Half that still needs to be recapped (sorry 2016 DL Half) after the race and it was fun to see them too. I love all the people that runDisney brings together!

As I’ve come to expect, Disney PhotoPass photographers KILL IT with the race photos. Not only are they great, but they get a TON and get them loaded to your PhotoPass in really excellent time (most photos in this post are c/o PhotoPass).

However, speaking of photos… there were no official character stops in this race. We did run by some characters (where there were runners queued up to take photos), but no stops like last year. I know there were a lot of people disappointed by this, so it seems worth mentioning. I don’t stop for photos, so I was good. I got to see Hook and Smee, lots of lost boys scattered about the parks (they were the big theme for the 10K this year), and I seem to recall hearing Pan and Wendy were out and about, but I don’t remember seeing them myself. I remember seeing other characters, but I think I’m recalling the half, so I’ll save that for tomorrow.

The on-course support staff seemed great and I was definitely unsure of what to expect given the switch from volunteers to paid staff. In the 10K, I didn’t notice any difference. The runner’s boxes at the finish had the delicious cheese flavored cheese as well as some other regular staples.

Did you run the Tink 10K this year? How was your experience with some of the changes?

Check the Instagrid for a fun finish boomerang and a preview of stories to come! 🙂

I LOVE being a part of Kellsie's Krew. It seriously means SO much to run for this incredible foundation and it is amazing how many of you have joined me in raising funds for them. Thank you for your contributions! This wouldn't be possible without you. 💖 One race down, one to go! 💝 #momentumjewelryambassador